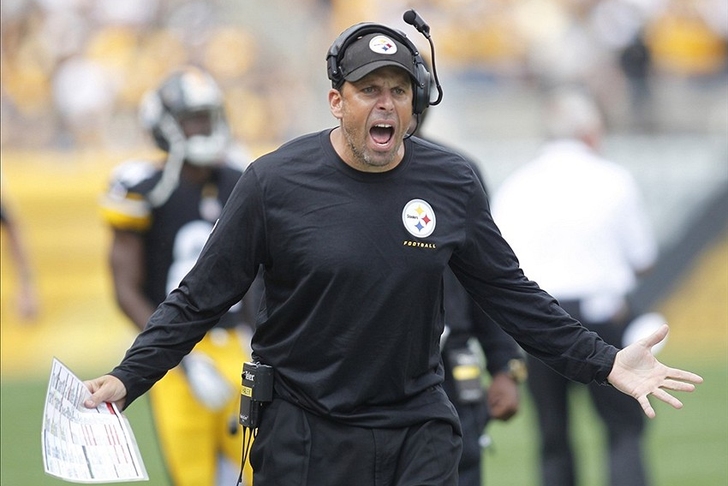 Steelers offensive coordinator Todd Haley certainly hasn't done much to win over fans in the Steel city. Pittsburgh is 0-3 for the first time in 13 years, and the offense has looked disjointed, disinterested and disappointing. Fans have voiced their displeasure on Twitter and Facebook, with #fireToddHaley trending in Pittsburgh during last night's 40-23 loss to the Chicago Bears. It certainly doesn't help Haley's case that the Chiefs, now a year removed from his head coaching tenure, have started 3-0 under Andy Reid.

There's word that Antonio Brown has little interest in working with Haley, and patience is wearing thin within the Pittsburgh media as well. While the offense finally showed signs of life against Chicago, they couldn't hold on to the ball, and only a massive and unprecedented turnaround would transform Pittsburgh into a playoff team.

Ben Roethlisberger had a notoriously cold relationship with Haley last year, but word out of training camp was the two had mended fences. With Roethlisberger playing poorly and Pittsburgh struggling to move the ball once again, it seems like only a matter of time before something gives - given that Haley is only in his second year with the team, it's clear that he'd be the first out the door.

Mike Tomlin is still well-respected within the Steelers organization, and there's no way Tomlin would be fired before Haley would be shown the door. A fourth straight loss would almost definitely end Haley's tenure with the Steelers, and even if Pittsburgh beats the Vikings next Sunday Haley will still be very much on notice. If Todd Haley is going to keep his job, the Steelers offense will need to show a lot of progress in a short amount of time.