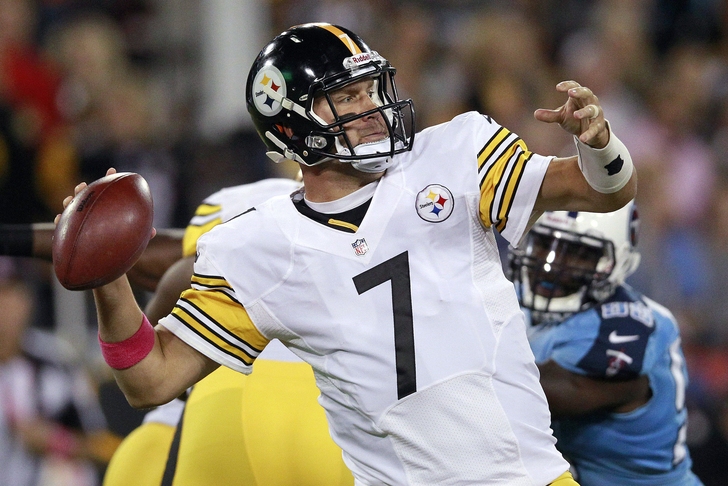 Pittsburgh Steelers quarterback Ben Roethlisberger went off on Sunday, going 40-of-49 for 522 yards and six touchdowns in the Steelers' 51-34 home victory over the Indianapolis Colts.

Roethlisberger is the first quarterback in NFL history to throw for 500 yards or more in two different games. He threw for 503 yards in a 37-36 victory over the Green Bay Packers back in December of 2009.

The Steelers' signal caller broke his own franchise record with his yardage output on Sunday, zipping passes all over the field from the opening whistle on. His six touchdown passes set a new career-high, eclipsing his previous career-high of five (set twice).

Big Ben's amazing day places ties him for 4th all-time with Boomer Esiason for yards passing in an NFL game. He finished just 32 yards short of Norm Van Brocklin's league record of 554 yards, set back in 1951 with the then-Los Angeles Rams.

Roethlisberger spread out his throws on Sunday in front of a raucous crowd at Heinz Field, with five Pittsburgh Steelers players amassing more than 50 yards receiving. Both WR Antonio Brown (10 catches, 133 yards) and TE Heath Miller (seven catches, 112 yards) went for over 100 yards receiving on the day.

He was 23-for-27 for 320 yards in the first half alone, before feeding it to the running game a bit more to protect the Steelers' lead in the second half.

Also of note: Indianapolis Colts QB Andrew Luck threw for 400 yards in the loss. The 922 combined passing yards is the most in a game in NFL history.

Stay tuned to Chat Sports for all the reactions from Big Ben's amazing day in Pennsylvania.

For all the latest Steelers news, follow our Pittsburgh Steelers team page today!