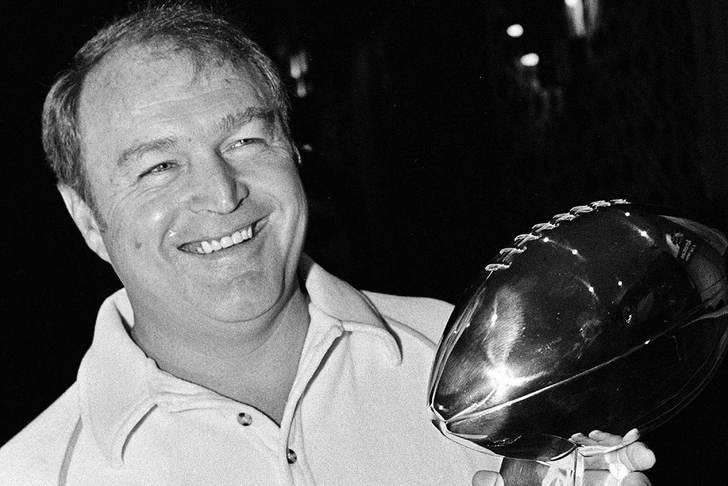 Chuck Noll, the architect of the 1970s "Steel Curtain" Pittsburgh Steelers and the only head coach to ever win four Super Bowls, passed away at his home in Sewickly, Pennsylvania on Friday night. He was 82 years old.

Per a Pittsburgh Post-Gazette report, Noll was suffering from Alzheimer's disease along with undergoing treatment for back problems and a heart ailment.

Widely regarded as one of the toughest yet fairest coaches to ever walk an NFL sideline, Chuck Noll knowingly sidestepped the spotlight as much as he possibly could - choosing to let his hard work, and the hard work of the players who fought for him with undeniable passion and loyalty, do the talking.

"He would teach new draft choices who were all-American guards how to get into a stance," seven time Pro Bowl linebacker Andy Russell once told ESPN, via the New York Times. "In his first year, we won out first game and lost 13 in a row. He said: 'We will get worse before we get better because I'm going to force you to play the right way.'"

Noll was unflinching in his quest to ensure that the Steelers under his charge understood how to play the game "the right way," along with never wavering when his singular vision was challenged both by fans and players alike.

This once-in-a-generation resolve was the driving force for the Pittsburgh Steelers teams of the 1970s, as Noll led the Steelers to four Super Bowl titles in six years (1974, 1975, 1978, 1979), along with capturing nine AFC Central division championships in his 23 years as the team's head coach.

The 1970s Steelers became synonymous with the decade in which they dominated, just like Lombardi's Green Bay Packers of the decade before and Bill Walsh's 49ers teams of the decade right after.

Noll had every opportunity to capitalize on his success with a multitude of endorsement opportunities, yet declined all of them in favor of focusing on what he loved most - teaching men the correct way to play the game of football.

“I can remember the first meeting I was ever in as a rookie player, and after 20 minutes feeling like I know what it takes to win a Super Bowl,” former Steelers player and current NFL analyst Tony Dungy told USA Today in 2012.

The confidence that Dungy acquired in his dealings with Noll was the rule, not the exception. Countless former players and assistant coaches have come out both before and since his passing to express the level of greatness he could inspire, as long as one opened up to the message he was attempting to convey.

When asked by Sports Illustrated in 2007 how he wanted to be remembered when all is said and done, Noll replied: “A person who could adapt to a world of constant change. But most of all as a teacher.”

Chuck Noll didn't just aspire to do such things. He never simply aspired to do anything. Noll demanded every detail to be as close to perfect as humanly possible, from his players and, perhaps most importantly, himself. In doing so, we all became students of the way he went about his work.

We also learned what it means for a game to be played with the respect befitting of grown men being paid to do exactly what they love to do.

Here's to you, Chuck. Thank you.