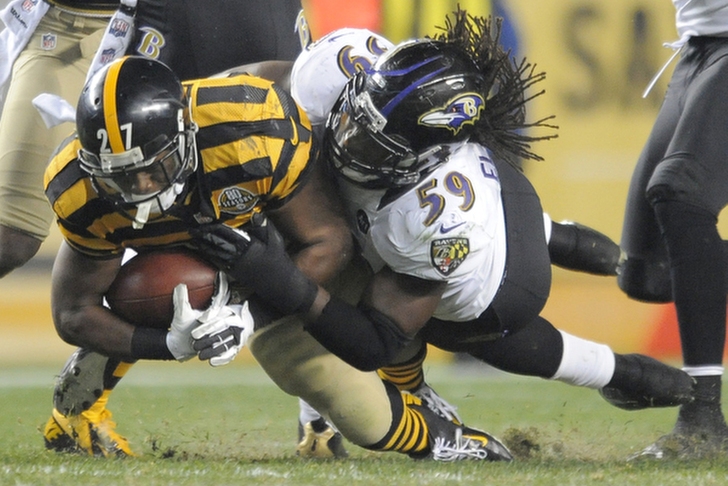 The Pittsburgh Steelers and Baltimore Ravens engaged in a first half similar to many halves they've played over the course of their intense rivalry - low-scoring, tense, with plenty of impact being dished out by both defenses.

Baltimore would pick up the only touchdown in the opening 30 minutes (after a lengthy, impressive first quarter drive), and a field goal apiece would prove the only other scoring as the Ravens went into the locker room holding a 10-3 lead.

Pittsburgh Steelers head coach Mike Tomlin promised to "change things up a little bit" in the final 30 minutes, and whatever he said to his men during halftime seemed to add a definitive edge to their play coming out of the break.

Baltimore's offense would run into an absolute brick wall on their first possession, losing nine yards on a three-and-out (thanks to a holding penalty) as the Steelers' attack would be handed the ball at midfield just under one minute into the third quarter.

Despite hitting on 73.7% of his passes in the first half (14-for-19), Pittsburgh QB Ben Roethlisberger's 128 yards passing weren't enough to hit pay dirt in the face of an opportunistic Ravens defense.

OLB Elvis Dumervil's second sack of Big Ben kept that trend alive on Pittsburgh's opening drive of the second half, as the Steelers were forced to settle for a 43-yard Shaun Suisham field goal after a promising push into Baltimore territory.

After three straight drives with negative yardage amassed, the Ravens offense was faced with a critical possession with their lead cut down to 10-6. QB Joe Flacco was beyond up for the challenge, as he went 6-for-7 to lead Baltimore on a 12-play, 80-yard touchdown drive - capped off by TE Owen Daniels' second TD grab of the night.

A visibily-irritated Mike Tomlin (due to two questionable personal foul penalties that extended the Ravens' previous drive) would be forced to watch on as his Pittsburgh Steelers looked to chip away at a 17-6 deficit in front of a hostile Baltimore crowd.

Pittsburgh's response? A quick three-and-out (forced by a swarming Baltimore secondary), only deepening Tomlin's frown as the clock hit 3 minutes to go in the third quarter.

Without a single takeaway over the first seven quarters, Pittsburgh's D had relied on a bend-not-break methodology to keep themselves afloat to start the season. A critical third-down stop did just that at the opening of the fourth quarter, stopping a Ravens' ten-play drive just short of the end zone.

Following a Justin Tucker chip shot that extended Pittsburgh's advantage to 20-6, Ben Roethlisberger would need his 24th career fourth-quarter comeback if the Steelers were to move to 2-0.

Disaster would beckon, however, on the Steelers' next drive. TE Heath Miller would have a six-yard reception ripped away by two Baltimore defenders. First-year LB C.J. Mosley would scoop it and scramble to the Pittsburgh 20, sucking the wind out of the Steelers' drive before it got out of first gear.

With Ben Roethlisberger just 3-of-9 for 17 yards in the second half at that juncture, the Baltimore Ravens had weathered some nifty moves by Pittsburgh RB Le'Veon Bell to begin the process of putting the game to bed.

The Ravens would shave 4:53 off the clock on the following seven-play drive (keyed by a 42-yard mad dash by RB Justin Forsett to the Pittsburgh 1), as Justin Tucker edged the game closer to full-on sleep mode with a 20-yard field goal that made it 26-6.

With four-and-a-half minutes to go and a full cache of timeouts, Roethlisberger would use seemingly-healthy WR Antonio Brown to move the Steelers all the way down to the Baltimore 14.

However, as was the theme of the whole game, it all came for naught after a Haloti Ngata interception - Pittsburgh's third (and final) turnover of the game.

Joe Flacco would be able to use his running game to clock it out, finishing up an efficient and impressive 26-6 victory for the Ravens.

This marked the first time in six games between the two rivals that a contest wasn't decided by three points or less.