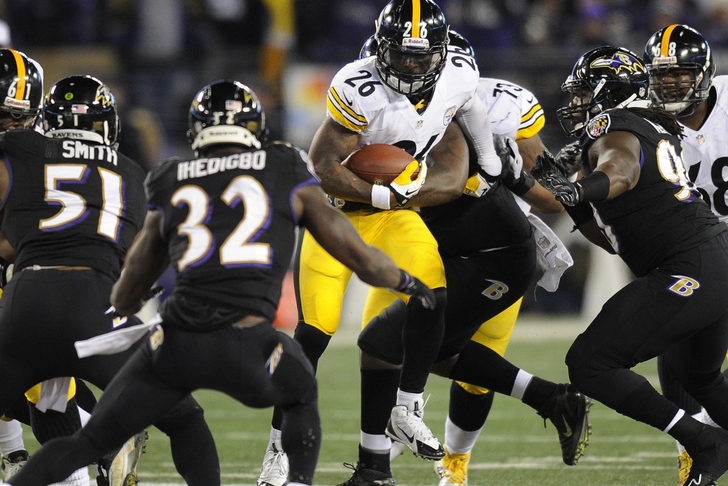 Week 2 of the NFL season kicked off with a huge matchup in the AFC North as the Baltimore Ravens looked to escape going 0-2 in the division to start the year in a rivalry clash with the Pittsburgh Steelers.

With the scrutiny of the greater media world hyperfocused on the Ravens in the wake of former RB Ray Rice's indefinite suspension from the league, the Ravens had a chance to get back to focusing on football for a few hours.

The Steelers presented a unique challenge for Baltimore, dedicated to proving their defensive mettle early after giving away a 27-0 lead in Week 1 against the Cleveland Browns before a late field goal saved Pittsburgh and a 30-27 victory.

After throwing for 365 yards and a touchdown in that contest, Steelers QB Ben Roethlisberger looked to keep the Pittsburgh offense rolling early on with a deft mix of runs by RB Le'Veon Bell and passing routes to the short flats.

That would work perfectly for the majority of the Steelers' 12-play, 64-yard opening drive, as Roethlisberger would go 5-for-6 for 35 yards to drive Pittsburgh to the edge of the Baltimore red zone. However, WR Justin Brown would cough up Big Ben's fifth completion, as Ravens LB Daryl Smith would pick up the loose rock to seal the turnover.

Steelers WR Antonio Brown was walked off the field with what was termed to be a potential head injury, as the announcers speculated as to whether or not Pittsburgh's most effective aerial weapon would be able to return to the field.

From there, the first quarter found itself a definitive theme as Baltimore matched Pittsburgh's clock-eating 1st drive with a lengthy possession of their own.

However, the Joe Flacco-led 12-play, 85-yard drive (which spanned six minutes and 26 seconds) wouldn't be turned back as had happened to Pittsburgh, as Flacco would seal the game's first six points with a loft to wide-open TE Owen Daniels for a tw0-yard TD.

With the Steelers set to take the field for their second possession of the game, news broke that Antonio Brown was being evaluated for possible concussion symptoms in the team's locker room. His return was listed as questionable. The potential injury came on his second catch of the first drive, as he was hit going across the middle by Baltimore safety Darian Stewart.

Minus Brown, the Steelers' running game was left without one of its main decoys (and end-around specialists) as the smothering Ravens' front seven was able to key in on RBs Le'Veon Bell and LaGarrette Blount (six carries for just 16 yards in the first 17 minutes).

The Steelers' offense would struggle without Brown on their second drive, handing momentum (and the ball) over to Baltimore. Brown would eventually return to the field for the Steelers (concussion symptoms negative), so his absence would only hurt them for a few minutes of the game clock.

The Ravens would cash in for three points after another long, winding drive (12 plays, 65 yards, 5:32) to extend their advantage to 10-0 with eight minutes left in the second quarter.

Having been outscored 37-3 over the span of 52 minutes of game time (all the way back to halftime of Week 1), the Steelers offense came out with something to prove on their next possession.

In particular, Le'Veon Bell started to find space, illustrated by a whirling 21-yard run off right tackle that set the Steelers up in Ravens territory with under five minutes to go. He would add a 18-yard shovel pass reception on the very next play, setting up a 25-yard Shaun Suisham field goal to shave the Baltimore advantage to 10-3.

Baltimore's next drive would mark just the sixth total possession between the teams in the first half - emblematic of the grind-it-out mentality that each offense brought to the table in this pivotal early-season divisional showdown.

The Steelers defense would stiffen considerably, however, forcing a Baltimore three-and-out with under two minutes left and all of Pittsburgh's timeouts still in hand.

Roethlisberger would use the wiggle and escapability of his receiving corps to move the team across midfield, but a crucial false start penalty would take them out of field goal range with time winding down. Baltimore would sit on the ball after a punt, making it 10-3 Ravens after 30 minutes.