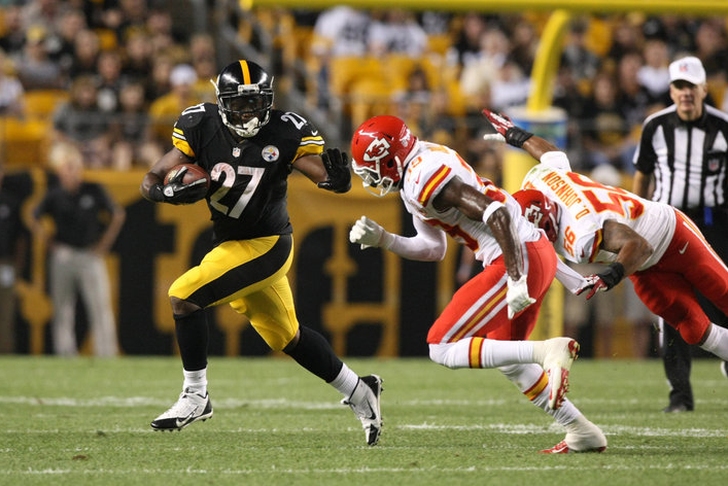 There's no way around it - the 0-4 Steelers have been one of the season's biggest disappointments. They're lucky to have the hapless 0-5 New York Giants and the abysmal Jacksonville Jaguars around to keep them out of the 'worst team in the NFL' discussion.

This season may already be a lost cause - everyone else in the AFC North is 3-2 (even the Browns, somehow) so it might be time to start thinking about the future.

Steelers RB Jonathan Dwyer has flashed potential in his four seasons with the team, and looked like the answer at running back for the foreseeable future during the 2012 season. Dwyer is a powerful, punishing north-south runner, and he's a great compliment for the physical style of football that Pittsburgh likes to play.

A few eyebrows were naturally raised when the Steelers took RB Le'Veon Bell in the second round of the 2013 draft - why draft a running back who could start for your team when you have one about to inherit the starting position?

After Bell's debut against Minnesota, it became apparent - Bell is a much more explosive threat than Dwyer. Bell has the speed and acceleration to find gaps and burst into the second level, but at 6'2 and 230 lbs he's also a physical runner who fits with Pittsburgh's style.

So, why does Pittsburgh need both players? They could certainly platoon the two, but if Pittsburgh gets serious about rebuilding from the ground up, one of the tailbacks is likely going to be headed elsewhere. Based on chatter from around the league, it looks like that player is going to be Dwyer.

It doesn't hurt Bell's case that in his first NFL start, he scored as many touchdowns as Dwyer did through his first three NFL seasons. It isn't all Dwyer's fault that he hasn't found the end zone often (he was used situationally through his early Steelers career), but Bell's potential definitely outshines what Dwyer has shone so far. Still, Dwyer is a talented player who could easily develop into a NFL workhorse. If the Steelers decide to shop Dwyer for picks, he could definitely go for a third-rounder - or possibly even higher.

If the Steelers decide to enter rebuilding mode, trading Dwyer seems like a no-brainer. Bell has shown the ability to excel at the NFL level, and Steelers brass is reportedly very excited about his potential. There's no imminent move planned, as Dwyer signed a new contract recently, but we wouldn't be surprised if Pittsburgh starts quietly shopping Dwyer around if things don't show signs of improvement over the next two weeks.