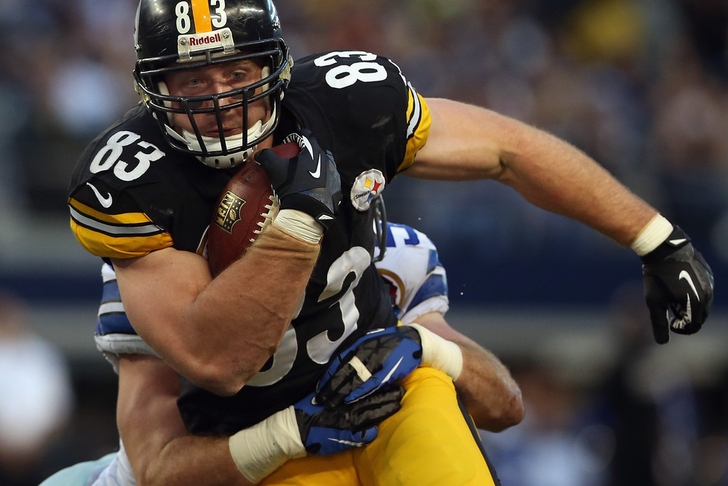 The Pittsburgh Steelers come in to tonight's game against Chicago as the early season's most surprising disappointment. The Steelers have looked unimpressive on both sides of the ball in their first two matchups - a shocking home loss to the Tennessee Titans and a listless performance in Cincinnati on Monday Night Football.

Rookies Kyle Long and Jordan Mills started on the Bears' offensive line, but they played like veterans as Chicago's run game dominated the first quarter.

The Bears rolled into Steelers territory on their first drive of the game, but Pittsburgh's defense stalled them and eventually held after a big play third-down play by Troy Polamalu. The Bears were forced to settle for a 47-yard Robbie Gould field goal.

Pittsburgh's response was unfortunately typical of their season so far. The drive started with promise, as Felix Jones quickly picked up a first down on the first play from scrimmage, but two plays later Ben Roethlisberger lost control of the ball trying to evade a sack and the Bears were able to recover.

Chicago took over at the Pittsburgh 17, and the Bears took advantage with a Matt Forte touchdown run after just three plays. With 5:05 remaining in the first, the Bears extended their lead to 10-0.

Another Pittsburgh three-and-out didn't give the defense much rest, and they trotted back out just a minute after leaving the field. Chicago's run game picked up where it left off, as Kyle Long and Jordan Mills opened a huge gap for Matt Forte to run through. Forte blazed through into the second level and picked up 55 yards before Steelers defenders finally managed to take him down.

The Bears continued into the red zone, and after two successive Bears runs were ruled inches short of the goal line, the Steelers faced a decisive fourth-down stand. Bears RB Michael Bush was able to punch the ball in, and with 2:01 remaining in the first quarter the Bears increased their lead to 17-0.

On the last play of the quarter, with Pittsburgh driving toward midfield, DJ Williams burst through the middle to bring down Roethlisberger for a sack.