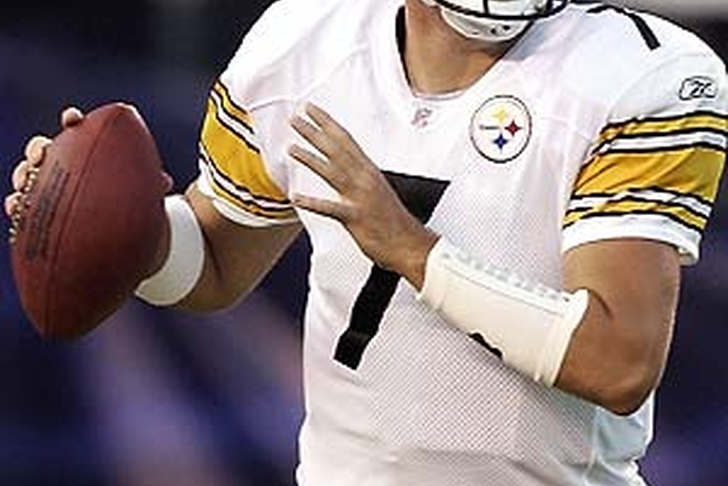 The first quarter of tonight's Monday Night Football matchup between the Steelers and the Bengals was far from the opening the Steelers would have wanted.

The second quarter would have gotten off to an even worse start if not for some questionable throws by Bengals QB Andy Dalton. Dalton didn't look like he was on the same page as his receivers on multiple throws, and generally seemed out of sync with AJ Green and his other wideouts. Although the Bengals drove up to the Pittsburgh 23, the drive stalled there after two straight incompletions and a Mike Nugent field goal extended Cincinnati's lead to 10-3 with 13:16 remaining in the half.

Unfortunately for the Steelers, Roethlisberger looked no better than Dalton. Big Ben threw two passes that weren't even close to their targets, and another three-and-out handed the Bengals another possession after just a minute.

Fortunately for Pittsburgh, the next Bengals drive fizzled out quickly. Pittsburgh got the ball back with 9:13 left in the half, and showed some signs cohesion on offense before another miscommunication between Roethlisberger and Jerricho Cotchery ended the drive prematurely. Cotchery was open on third down, but Roethlisberger's pass sailed several feet over his target's head and out of bounds - taking him to 4 for 11 on the day.

The Bengals took over with 5:13 left in the quarter, but more Andy Dalton miscues led to another three-and-out. The ensuing Steelers possession saw them take the positives from their last drive and build on them - a 19-yard pass over the middle to Emmanuel Sanders set up another catch-and-run that Sanders took all the way down to the Bengals 1. Cotchery was pulled for rookie Derek Moye, and Roethlisberger put his pass on a dime for the Penn State product to tie the game at 10 with 1:54 left in the half.

The Bengals drove toward midfield, but weren't able to make headway into Steelers territory. With the ball on Pittsburgh's 43, Marvin Lewis decided to keep his kicker off the field and go for the hail mary, which was batted down in the end zone. At the half, the score is Pittsburgh 10, Cincinnati 10.

First half MVP: Ben Roethlisberger. Big Ben started out 2/8, but completed 7 of his next 8 passes to finish 9/16 for 130 yards and a touchdown.