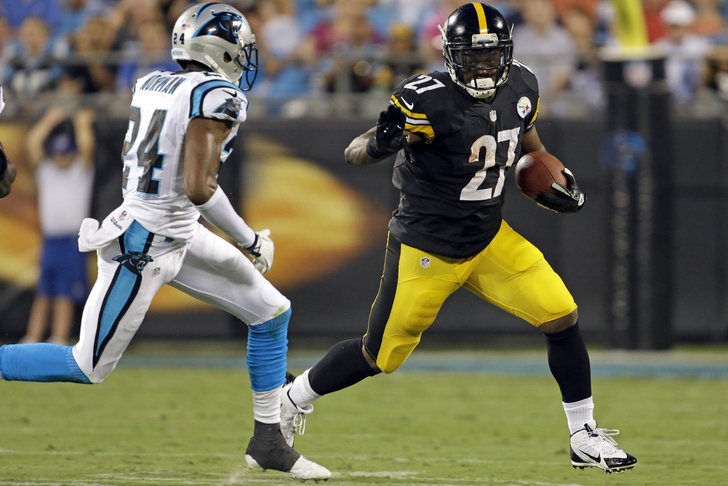 Two fourth-quarter touchdowns added some respectability to the scoreline, but for three quarters, it was as impressive a defensive performance as we've seen out of Pittsburgh in years. The Steelers shut down a hobbled Cam Newton, found a groove on offense and ended up blowing out Carolina 37-19 on the Panthers' home turf.

Here's what we saw in this Sunday Night Football beatdown:

The Steelers have found their running back tandem of the future. Le'Veon Bell was excellent in this one, making defenders miss with an array of dazzling moves and naturally gravitating to open space. LeGarrette Blount was the thunder to his lightning, punishing defenders with a physical, explosive running style. The two picked up 265 yards on 31 carries (including an 81-yard burst from Bell that was Pittsburgh's longest run since 1970), but they weren't the only exciting players on Pittsburghs' offense.

Antonio Brown was stellar, and needs to be considered one of the league's elite wide receivers. Brown asserted himself for the third straight game, racking up 90 yards and two touchdowns on 10 catches. The first touchdown - an improvisational stunner from Roethlisberger that Brown hauled down in the corner of the end zone - will get playing time on every highlight reel you see this week.

The major damper on Pittsburgh's night, though, was cornerback Ike Taylor's broken arm. One of the sports .GIFs you want to avoid at all costs before dinner, the injury will rob the Steelers of one of their key defensive playmakers for at least a few weeks.

Carolina's defense hung in there during the first half, but looked like they ran out of gas shortly after the break. Bell's 81-yard run got the Steelers out of a tough situation, and when LeGarrette Blount took over in the fourth he was able to find similar success on the ground. All in all, this was a day at the office Carolina's D would like to forget quickly.

The Panthers' offense wasn't much better. Cam Newton's success largely draws on his mobility, and his ankle and rib injuries robbed him of the ability to improvise and extend plays on his own. Rookie WR Kelvin Benjamin is a serious weapon for Carolina, but Newton was unable to utilize him effectively tonight. While the Panthers started to click on offense early in the fourth quarter, it was too little, much too late.

Pittsburgh's offense finally put all the pieces together, and a vintage defensive performance put the icing on a very impressive victory for the Steelers. The Panthers now hit the road to face Baltimore, but first they'll have to analyze a night when it felt like absolutely everything went wrong.

Pittsburgh's running backs were fantastic, and this was the best rushing performance by a Steelers team in recent memory. An offense that spent years searching for one feature back now appears to have two.