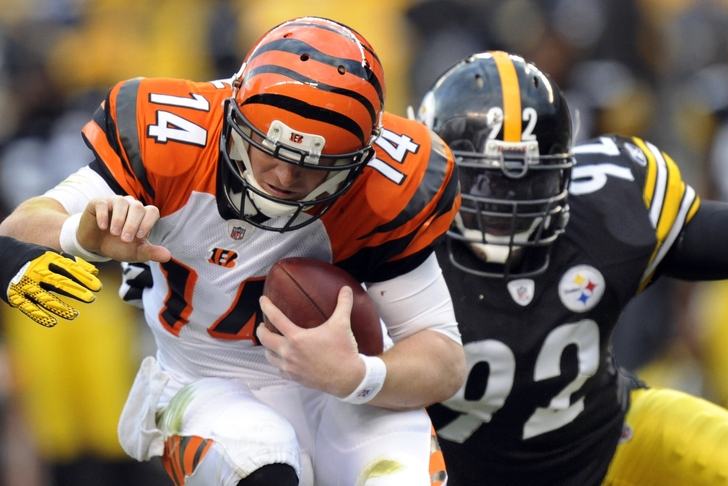 In a game with major playoff implications, the Steelers used a 24-point fourth quarter to pull away from the Bengals for a key 42-21 win. Bengals QB Andy Dalton went down with an injury in the fourth and was replaced by Jason Campbell - his status going forward is currently unknown.

It's hard to believe after what we just watched, but the Bengals actually led this game 21-17 going into the fourth quarter. In under nine minutes of game time, the Steelers scored 24 points to put the game away, and Martavis Bryant's 94-yard TD catch with 8:31 remaining was what really sealed the deal.

There are plenty of options to choose from, but we have to hand it to RB Le'Veon Bell. Bell has been sensational since taking over as Pittsburgh's feature back, and he racked up 185 yards and two touchdowns today on 26 carries. Ben Roethlisberger, Antonio Brown, Martavis Bryant and LB Arthur Moats all deserve praise as well, though.

A.J. Green was phenomenal, hauling in 11 catches for 224 yards and a touchdown. On a rough day for the Bengals, Green's performance was a real bright spot.

The difference in this game was Pittsburgh's ability to extend drives - the Steelers were 8/16 on third down conversions, while the Bengals were 3-11.

Pittsburgh, now 8-5, will travel to Atlanta for a matchup with the Falcons. The 8-4-1 Bengals travel to Cleveland for an extremely important game against their in-state rivals.