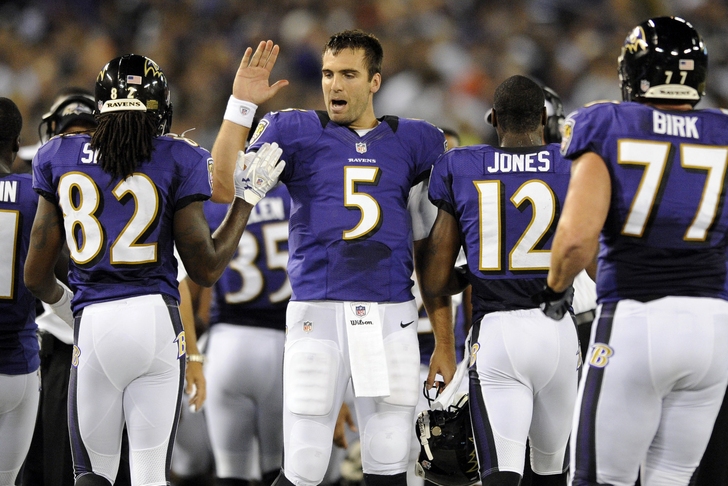 The Baltimore Ravens relied on a tried-and-true method during their 30-17 victory over the Pittsburgh Steelers in Saturday's AFC Wild Card game, riding an opportunistic defense and Joe Flacco's arm to set up yet another playoff date with Tom Brady and the New England Patriots next week.

Down 23-15 with just over eight minutes left, Steelers QB Ben Roethlisberger threw an ill-advised short pass intended for RB Ben Tate. Ravens linebacker Terrell Suggs would make Big Ben pay, picking the ball off and setting Joe Flacco and the offense up at the Steelers 21.

One play later, Flacco cashed in with a 21-yard TD strike to tight end Crockett Gillmore to extend the lead to 30-15.

Joe Flacco has thrown 13 touchdowns against zero interceptions in Baltimore's last five playoff games. When the games matter the most, Flacco earns his paycheck and then some.

The Baltimore defense was borderline amazing for stretches and the running game did its job, but Joe Flacco (18-of-29, 259 yards, 2 TD) did one heck of a job of mixing game management and the odd big play to help the Ravens pull away in the end.

As he's did all season long, Antonio Brown did everything in his power to bring the win home for Pittsburgh. He caught nine balls for 117 yards, once again proving himself to be one of the NFL's elite wide receivers.

The Baltimore Ravens advance to an AFC Divisional Playoff showdown with the New England Patriots in Foxboro - the teams' 4th postseason meeting in the past six years (Baltimore leads the playoff series 2-1).

Pittsburgh heads home with a ton of "what if's" to sort through before starting the long offseason ahead.