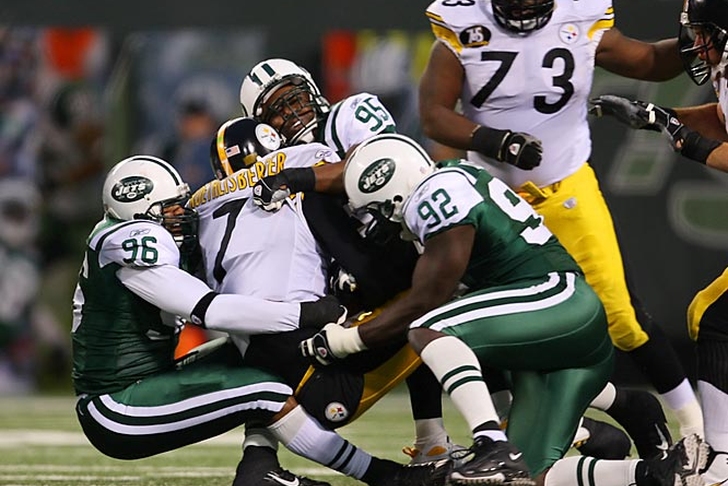 After two dominant offensive performances against the Colts and the Ravens, the wheels came off for Pittsburgh against the (previously) 1-8 New York Jets.

This was a game where despite the surprising outcome, the result never really looked in doubt after the first quarter. The Jets scored a season-high 17 points in the first and let their defense see things out from there. While a late touchdown from the Steelers made things interesting, it just wasn't enough.

After throwing for an NFL record 12 touchdowns over his last two games, Ben Roethlisberger didn't find the end zone until the 1:28 mark of the fourth quarter. It was too little, too late.

The defense deserves plenty of love, but Michael Vick didn't just look like an improvement...he looked like he traveled back in time 10 years. With ankle-breaking moves and solid throws, Vick was the difference for the Jets today.

Pittsburgh's running game? The Steelers got absolutely dominated by the Jets front seven....while New York's big guys are much better than their record shows, the Steelers failed in every element of the run game today, from the play-calling to the blocking to the execution by the backs.

Pittsburgh will need to find answers in a hurry - their next game is in front of a national audience on Monday Night Football. The Titans shouldn't be a major threat...but then again, isn't that what they thought about the Jets?

New York will enter their bye week on a high note, and even with the playoffs out of reach, Rex Ryan's team will try to play for pride. If they can keep playing like they did today, they'll be a real nuisance for their next few opponents.