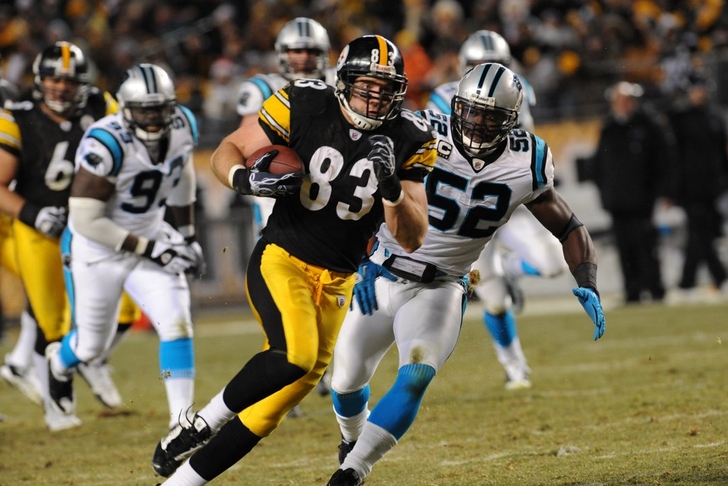 Cam Newton and the 2-0 Panthers are hosting Ben Roethlisberger and the 1-1 Steelers in Charlotte, and both defenses came to play on this Sunday night.

Here's what we've seen in the first half:

Haley was trying to make several substitutions at once to set up for a third-and-short, and crossed signals with the play clock winding down forced Ben Roethlisberger to burn an early timeout. Pittsburgh's OC is drawing all the wrong kinds of attention lately, and this didn't exactly help him set the tone.

Wearing a specialized vest to minimize damage to his ribs, Cam Newton toughed it out through a first half that saw his team unable to make major inroads on offense. Newton ended the half 12/17 for 117 yards, with no touchdowns or interceptions. A few big hits left him rattled, and we'll have more on Newton's status as the game progresses.

Keep Your Eye On Le'Veon Bell

Pittsburgh's 22-year-old RB isn't the finished article just yet, but he's clearly one to watch. Bell dazzled on several runs in the first half, leaving Steelers defenders tackling air, and his physics-defying cuts will make him a highlight-reel staple if he can continue to develop.

A major factor in Carolina's first-half struggles was the complete absence of a running game. Jonathan Stewart and Mike Tolbert never got going, and the Panthers mainly looked to their passing game as the half wore on. Carolina eventually racked up just 10 rushing yards on five attempts, and will need more on the ground if they want to even this one up.

The Search For The End Zone Continues

The Steelers haven't scored a touchdown since their week one win over Cleveland, and couldn't find the end zone in the first half after a touchdown pass was called back because WR Markus Wheaton stepped out of bounds.

Brown caught seven catches for 69 yards. While he didn't find the end zone, he was a reliable outlet for Ben Roethlisberger and helped the Steelers set up for three first-half field goals.

The reigning defensive MVP was everywhere for Carolina's defense, ending the half with nine tackles (six solo).