A Link Between Aaron Hernandez and Tim Tebow? What Does Evil Mike Tomlin Think 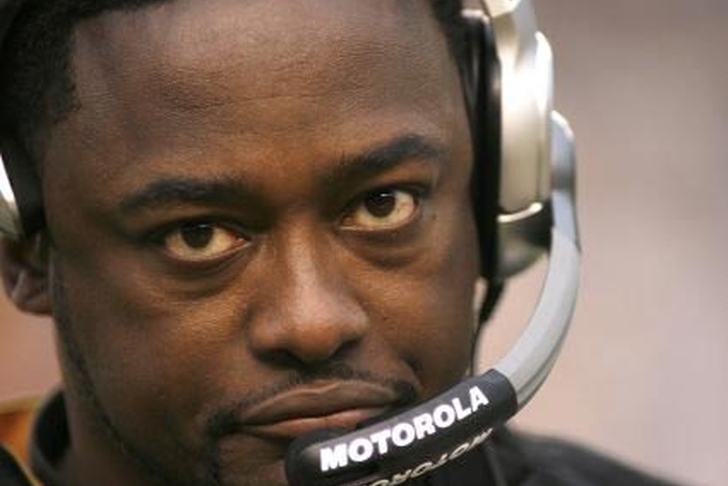 With the NBA Finals over, that means it's pretty much the dead time as sports seasons go (unless you like baseball like a real American, or hockey like a real man. I happen to like both, thank you very much). Regardless, I'm still equally pumped for the start of NFL training camps later this summer, and I wanted to talk to a man who lives football the way we all wish we could. That man is Pittsburgh Steelers head coach Mike Tomlin.

Unfortunately I couldn't speak to Tomlin himself, but I was able to chat with his hilarious twitter parody @EvilMikeTomlin. If you don't follow, here's a sample of what you're missing out on.

Tim Tebow will wear number 5, representing the number of plays he'll be in for this season

Detroit Lions reps say they "love what they see" from Aaron Hernandez and are expected to make a trade off soon — Evil Mike Tomlin (@EvilMikeTomlin) June 20, 2013

RT if you can't wait for football season! I understand if you don't RT, Browns fans

We didn't sign Tebow because our current towel boy is under contract until 2015.

How unbelievably scary does he make the Patriots, with his dashing looks and youth? What if he makes Belichick human?

He makes the Patriots incredibly scary. I hear he's excellent at holding a video camera. And Belichick can't be human, humans have souls.

Did anyone on your staff suggest signing Tebow? In what method was he executed?

One time Ben was with a girl (not in a bathroom) who accidentally called him Tebow. It's a touchy subject in the locker room, so no, he wasn't considered.

What do you think Dan Rooney would do if Aaron Hernandez was on his team?

Rooney would have Aaron Hernandez exported to a Turkish prison.

Could Tebow save Aaron Hernandez’s soul?

No, not even Tebow can. Especially after he sold his soul to Ray Lewis.

Do you think Belichick’s satan-like demeanor rubbed off on Hernandez?

Ben is giggling at the fact that you said "rubbed off." smh.

How’s Big Ben recovering from knee surgery? I suppose it gives him an excuse to ride his motorcycle everywhere...

The knee isn't the issue, the forcefulness and the inability to take "no" for an answer is.

Seriously though, no Tebow? Steelers are kinda boring....

No Tebow...ever. I'll retire and run down the streets naked before we sign him.

Hey remember when Tebow “threw” an “80 yard” touchdown pass to beat you in the playoffs? Sorry, couldn’t resist.

What were your thoughts on the NBA Finals?

They were unnecessary. The Heat won at the beginning of the season.

As annoying as LeBron James is, what do you think he could do on a football field?

What position would you play LeBron at?

He could play TE. I think the Patriots need one....

Who is the Joey Crawford of NFL refs? Can’t be Hochuli, can it?

Don't ever say anything bad about Hochuli... he'll haunt you.

Check out The Dean's List everyday to see more stories like this from all over the web.