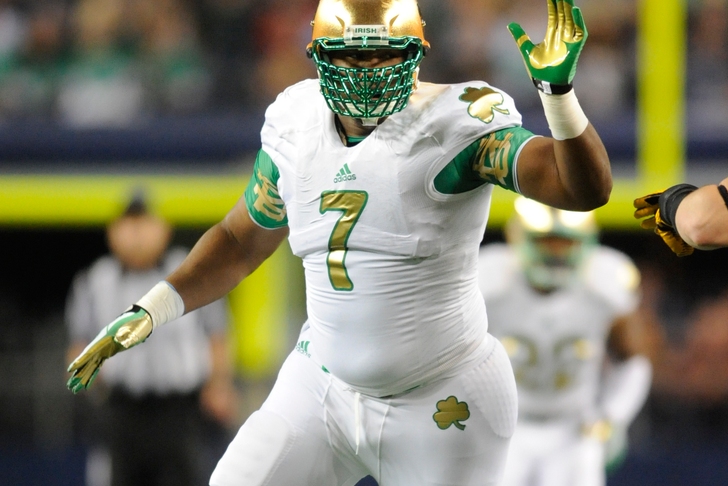 With the 46th overall pick in the 2014 NFL Draft, the Pittsburgh Steelers have selected Stephon Tuitt out of Notre Dame.

Tuitt shifted into a starting defensive end role for Notre Dame in 2012 and 2013, after playing in nine games with three starts as a true freshman in 2011. Tuitt posted 49 tackles (9.5 for a loss) and 7.5 sacks in 2013, adding an interception, a forced fumble, and two passes defensed. Tuitt missed most of the NFL Combine due to a fracture in his left foot -- which after surgery, also kept him out of his pro day. He did, however, bench 225 pounds 31 times at the Combine.

Tuitt has all the measurables of a starting five-technique defensive end, using his long arms to bounce off blocks and engage the ball. He flashes amazing movement laterally, showing full command of his coordination when forced to turn on a dime. He wraps tackles with extremely solid fundamentals, and can shift from defensive end to defensive tackle in both even and odd defensive fronts.

Check out Stephon's highlight video for a closer look into what he brings to the Steelers :

For all the latest Pittsburgh Steelers draft news, check out our draft page.