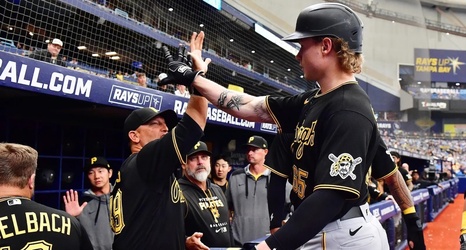 ST. PETERSBURG, Fla. -- Jack Suwinski had watched video on Rays southpaw reliever Jalen Beeks, trying to get a feel for the lefty's unique motion. Standing right on the edge of the rubber from the third base side with a straight back and forward arm motion, it can be a tough angle for a lefty hitter to get a feel for.

After getting ahead in the count, Suwinski changed his mindset.

"I was just sitting [for a pitch in] a small zone," Suwinski explained. "Just be short and compact."

Suwinski did just that and launched a 443-foot blast, the longest by a Pirate hitter this year:

For a long time, it looked like it would be the winning hit, though a Rays two-out rally against Pirates closer David Bednar, who blew the save and took the loss in a 6-5 decision Saturday at Tropicana Field.