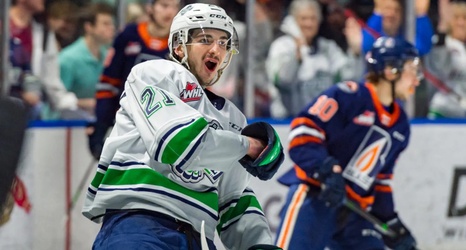 Penguins forward prospect Lukas Svejkovsky and the Seattle Thunderbirds are four wins away from a WHL Championship and a shot at the Memorial Cup.

The Thunderbirds eliminated the Kamloops Blazers in the WHL Western Conference Final on Tuesday with a 3-2 win in Game 7, coming back from an earlier 3-2 series deficit.

Svejkovsky recorded assists (two primary, one secondary) on all three Thunderbirds goals. The three-point night gives Svejkovsky 24 points (nine goals, 15 assists) in 18 games these playoffs, ranking No. 3 in postseason scoring in the WHL.

Svejkovsky had two goals in the conference final series against Kamloops.