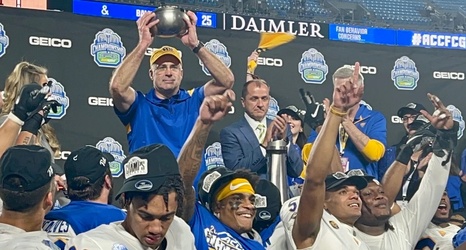 Pitt got to enjoy the spoils of victory Sunday after its ACC Championship win Saturday night. Several announcements awarded the Panthers for their 11-2 season and route of Wake Forest at Bank of America Stadium.

The most important of those was the announcement of Pitt's final game to come in the Peach Bowl in Atlanta, Ga. on Dec. 30 against the program Pat Narduzzi left to coach Pitt back in 2013 in Michigan State.

It's the first time Pitt has been invited to a New Year's six bowl game since its Fiesta Bowl loss to Utah in 2003.