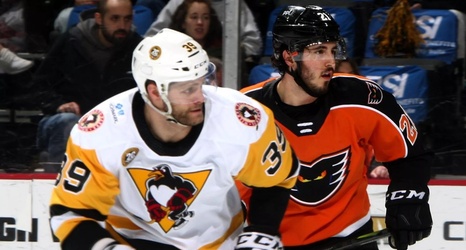 WBS opened this past week with their third and final weekday morning start of the season, visiting the Bridgeport Sound Tigers, who at the start of the week was still attempting to punch its own ticket to the Calder Cup playoffs. WBS flew out of the gates, scoring 3 goals in the first 6:33 of the contest, with Ryan Haggerty scoring his 21st and 22nd goals of the season between the first professional goal for Penn State’s Chase Berger. Jeff Kubiak for Bridgeport scored on the power play at 8:49 of the third to break Tristan Jarry’s shutout attempt, but that’s all they could muster as WBS claimed two points from its game in hand over Providence.