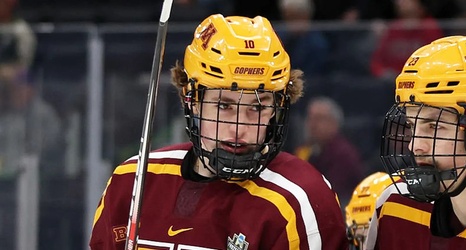 Penguins forward prospect Tristan Broz has officially transferred to the University of Denver beginning in 2022-23, the program announced on Sunday.

Broz, 19, was the Penguins' second-round pick in 2021 and was a freshman last season for the University of Minnesota, a team that reached the Frozen Four.

In transferring to Denver, Broz will be joining the defending national champions.

"We think Tristan's skillset and hockey sense will mesh seamlessly into our offense," Denver head coach David Carle said in a team release.

Broz initially had a difficult time adjusting to college hockey at the start of his freshman year, and trough his first 17 games he recorded just two assists and no goals.