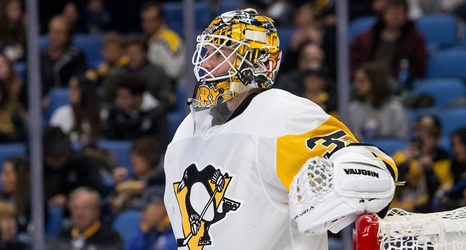 The Penguins have a couple of options when it comes to what happens with Tristan Jarry.

This coming season is the first season in which Jarry would require waivers to be assigned to Wilkes-Barre/Scranton, a result of reaching six professional seasons played. That leaves the Penguins with four potential paths:

• The Penguins could keep three goaltenders on the NHL roster. That's unlikely given the current lack of cap space.

• The Penguins could keep Jarry as the No. 2 goaltender, and move Casey DeSmith in some way.

• The Penguins could trade Jarry rather than risk losing him to waivers, leaving the likely minor-league tandems to be Dustin Tokarski and Emil Larmi in Wilkes-Barre, and Alex D'Orio and Jordan Ruby in Wheeling.