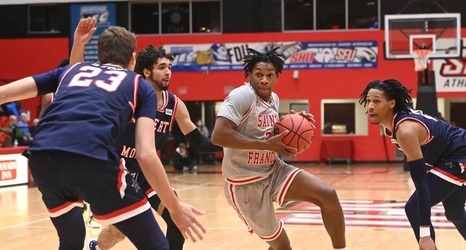 ALTOONA, Pa. -- Robert Morris ended the non-conference portion of the schedule on a high note with a 75-67 win over St. Francis Wednesday night in Loretto, Pa. Wednesday's win was only the second of the season, the first against a Division I opponent for the Colonials who moved to 2-9.

"That's about as good of a Christmas present as you can get," head coach Andrew Toole said. "Really proud of our effort tonight. We were a little bit sluggish to start, but to our guys credit there was great communication.

Robert Morris used a 19-5 run late in the first half to overtake the Red Flash catapulted by junior forward Matt Mayers scoring the first five of those points.