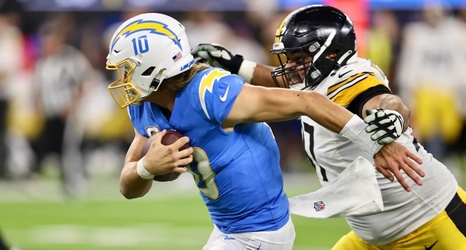 INGLEWOOD, Calif. -- Chargers quarterback Justin Herbert is in just his second NFL season and was making just his 25th career start here Sunday night a SoFi Stadium against the Steelers.

But he looked like a savvy veteran as he helped the Chargers build a 17-point fourth-quarter lead. And then, after the Steelers erased that lead and took a one of their own, Herbert snatched victory from the jaws of defeat by taking advantage of some of the Steelers' inexperience.

Herbert threw a 53-yard touchdown pass to Mike Williams with 2:09 remaining in the game to lift the Chargers to a wild 41-37 victory over the Steelers here, snapping the Steelers' streak of five consecutive games without a loss.