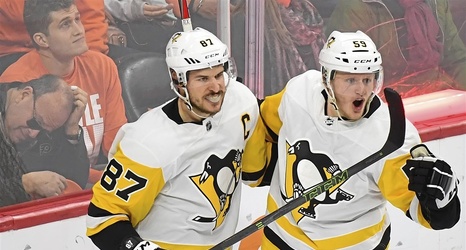 PHILADELPHIA — It’s an old story, but it’s one worth re-telling after what Jake Guentzel did to the poor Philadelphia Flyers on Sunday in a clinically insane, series-clinching 8-5 victory.

You had to be here to believe it, although I’m not sure Guentzel did. He called his outburst “a blur,” and who could blame him? It was hard to keep track as he rifled pucks past Michal Neuvirth like the latter was one of those cardboard-cutout goalies at an arcade.

One. Two. Three. Four. Win a stuffed animal for five!