How the Penguins can become cap compliant, and a potential roster 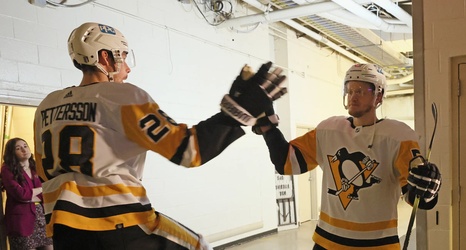 As mentioned earlier, the Penguins now sit slightly above the salary cap, though the outlook at CapFriendly comes with a caveat. That website shows Pittsburgh $480k over the upper limit, but it also has a full 23-player listing on the roster, including eight defensemen. Most NHL teams like to carry seven healthy defenders, so the question posed in the title could be boiled down to as simple of an answer as: “Mark Friedman or Chad Ruhwedel gets pushed off Pittsburgh’s NHL roster in the numbers game and possibly Ty Smith and P.O. Joseph switch places from CapFriendly’s look and that’s that”.