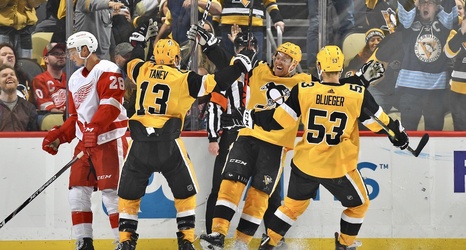 Patric Hornqvist nearly had a hat trick in Saturday's 5-1 win over the Red Wings.

After Valtteri Filppula opened the scoring for the Red Wings 5:37 into the game, the Penguins tied the game after a flurry of activity in the crease:

Hornqvist thought the goal was his and led the handshake line. When the goal was announced, though, it was credited to Sam Lafferty instead.

Shortly after, the in-house scorers reviewed the footage and credited the goal to Hornqvist. After the game, Hornqvist was if he knew for sure if the first goal was his.