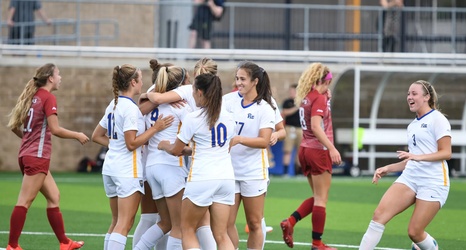 The Pitt women’s soccer team hosted St. Joseph’s at Ambrose Urbanic Field on Sunday afternoon and earned its third win of the season in a 2-0 shutout. The game also served as a showcase of Pitt’s young talent, as the team’s two goals were furnished by first-year players and it benefited from a clean sheet by freshman goalkeeper Caitlyn Lazzarini.

Although Pitt outshot St. Joseph’s 7-2 in the first half, it only put two shots on goal and failed to get either of those past Hawks goalkeeper Emily Cuccio. However, in the 73rd minute, Panthers star Amanda West was taken down in the penalty box and was awarded a penalty kick, which she converted to put Pitt on the board.