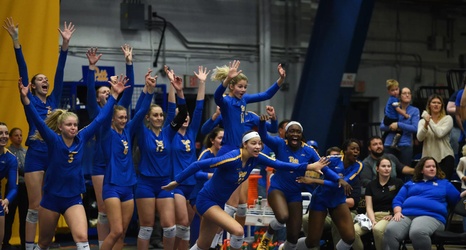 The No. 2 Pitt volleyball team has cruised most of the year but they were heavily tested this weekend. Despite that, they still clinched at least a share of a third straight ACC championship as second-place Notre Dame fell to Miami.

Coming into Friday night’s game against Georgia Tech, Pitt had lost only one set in the ACC all year on their undefeated conference run. But the Yellow Jackets took the Panthers to five sets before Pitt held on with a narrow 3-2 win.

Pitt got another somewhat unexpected test on Sunday against Clemson. The Panthers trailed 17-10 at one point in the first set and, despite making a run late to pull within two, they lost the set, 25-19.