Without Booker, Suns battle, but fizzle out in double overtime loss to Nuggets 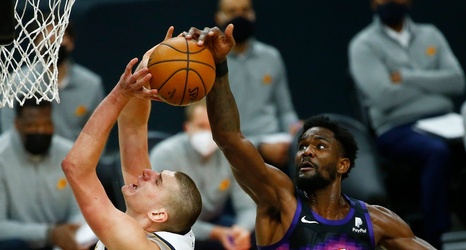 No Deandre Ayton late in the game.

No quit in the Phoenix Suns, but they faded late in a 120-112 double-overtime loss Saturday night to Denver in the second of a home back-to-back at Phoenix Suns Arena.

The Nuggets (9-7) needed overtime to beat Phoenix on Friday night as Booker left the game late in overtime with an hamstring strain.

Less than 23 hours later, the Suns pushed the Nuggets to two overtimes as Ayton fouled out with 1:38 left in the first overtime.

Chris Paul and Jae Crowder each scored a team-high 21 points for Phoenix (8-7), which has lost four of its last five games.