With the Suns still down Ayton, the Valley Boyz lose a close one to the Beach Boyz 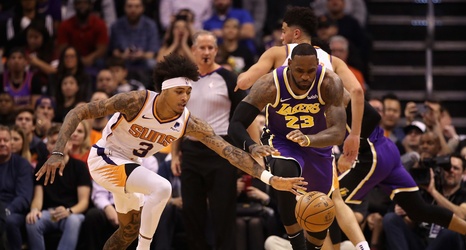 While watching the Phoenix Suns‘ Tuesday night’s halftime show featuring the sturdy-necked Serge & Sasha, I half expected the headline to read something like this:

Tragedy struck the Valley tonight when a man, while balancing a woman upside down on his head as she twirled a baton with her feet, attempted to climb a ladder during the Suns/Lakers halftime show at Talking Stick Resort Arena.

Good news: that was not the headline.

Bad news: The Phoenix Suns lost a game to their Pacific Division rivals, the Los Angeles Lakers in a game they could have won.