The Phoenix Suns tweak starters, still get blown out by Lakers 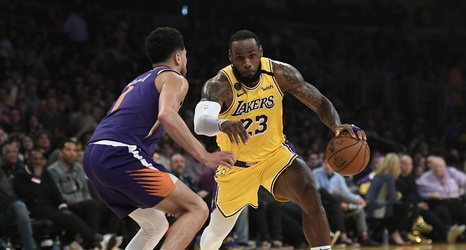 Monty Williams was up to his old tricks Monday night when he tweaked the Phoenix Suns lineup in what ended up being a 125-100 blowout loss to the Los Angeles Lakers.

Kelly Oubre, whose play has lived up to the Tsunami Papi moniker lately with four straight games of at least 20 points, came off the bench for the first time all season. His usurper? The lanky sharpshooting rookie, Cameron Johnson.

Or at least, so we thought sharpshooting was pretty much all he did. But just a few minutes into the first NBA start of his career, Cam Johnson did this:

As if JaVale McGee hasn’t been dunked on by enough people in his career, add Cam Johnson to the list from the who-knew-he-was-capable-of-that category.