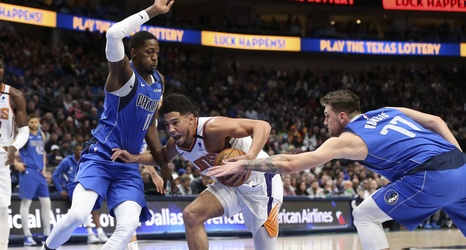 Devin Booker (32 points, 9 assists) and DeAndre Ayton (31 points, 9 rebounds) completely dominated the night for the Suns as Phoenix rolled to a 133-104 victory.

The Suns followed suit with many other teams by honoring Kobe Bryant with 8 and 24 second violations in reverence to his jersey numbers. Then the Suns put up some other great numbers.

11 - straight made field goals by Ayton to start the game

7,000 - career points for Booker (fourth youngest to that total in NBA history)

59/42/90 - the Suns shooting percentages from the field, three and the free throw line

29 - the Suns margin of victory (tied for a season high)

1 - bag fat L for Luka and the Mavericks

The Suns jumped out to a 13 point lead in the first quarter motivated by active defense and an engaged DeAndre Ayton.