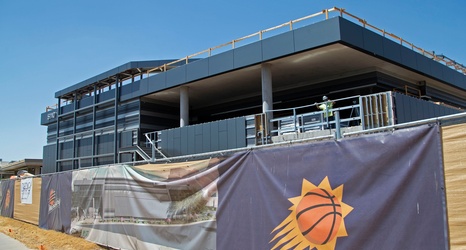 The Phoenix Suns are hopeful their $45-million practice facility will be completed sometime next month, teams officials said earlier this week.

The courts are being put in, but it will take "a few weeks" to install and paint, team officials said. The facility is being privately funded by the Suns.

Team owner Robert Sarver had an initial Aug. 1 target date at the groundbreaking ceremony last November. Team officials later said in July the structure would be completed by late August or early September.

Work has continued on the facility during the COVID-19 pandemic.