Channing Frye and Jared Dudley Reconnect with Suns Fans on Valley Chatz, Brought to you by Firstbank 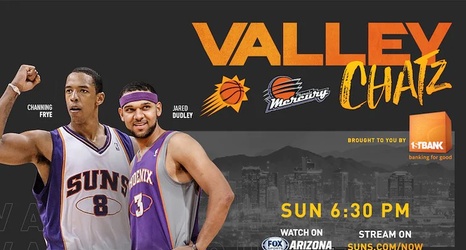 Former Phoenix Suns forwards Channing Frye and Jared Dudley caught up with Suns broadcaster Tom Leander in the latest installment of Valley Chatz, brought to you by FirstBank, to talk about playing alongside LeBron James, the next wave of NBA media personalities, life after basketball and more.

The newest Valley Chatz episode will premiere on Sunday, May 24 at 6:30 p.m. (PT) on Suns.com/now and FOX Sports Arizona, the team’s exclusive local television station, prior to “Sunsday” at 7 p.m.

During the conversation, the former teammates swapped untold tales about their favorite memories from their playing days in Phoenix, such as the indescribable energy in the arena during playoff games, the one and only instance in which Frye ever witnessed Hall of Famer Steve Nash eat a slice of pizza and the time when Dudley bought his first car – a Mercedes-AMG – off of none other than Channing Frye.