Up Next: Coyotes at Buffalo Sabres 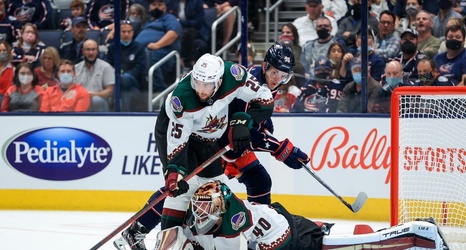 Arizona Coyotes at Buffalo Sabres, 10 a.m. Saturday, KeyBank Center, NHL Network, Bally Sports Arizona, ESPN 620 AM — The Coyotes (0-1) try to shake off a six-goal loss to the Columbus Blue Jackets, 8-2 on Thursday night in what was the largest margin of defeat and most amount of goals allowed in a season-opening game in franchise history. Arizona has lost six straight road openers. But that's all in the past, as a matinee game less than two full days after that loss gives the Coyotes an opportunity to quickly get back on the ice and show that they've learned from it.