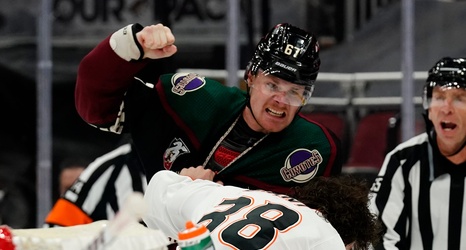 Coyotes defenseman Oliver Ekman-Larsson was trying to get Max Jones of the Anaheim Ducks out of the crease during the first period of Monday night's game at Gila River Arena.

A pair of bumps with Ekman-Larsson's stick deterred Jones momentarily, the second one as Jones tried to stand up. Jones put in a loose puck while being dragged down by Ekman-Larsson, then got to his feet and stood over the Coyotes' captain as if to taunt him.

That set off Coyotes goalie Darcy Kuemper, who went after Jones, and a melee with gloves and sticks flying ensued.