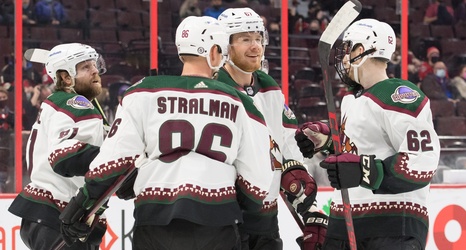 Lawson Crouse was on his way to career highs in goals and points in a season. He needed just one goal for a season high going into Monday night's game at Ottawa, with 24 games left in the 2021-22 campaign.

Crouse didn't just score once. The Coyotes forward posted a hat trick, the first of his NHL career, and did so in front of family and friends in the Canadian province where he's from.

"It's a special feeling. You always want to be out there and try to make the biggest difference you can make, and to get my first hat trick in front of some friends and family, it's a really good feeling," Crouse said after the Coyotes improved to 5-1-0 this month with a 5-3 win over the Senators.