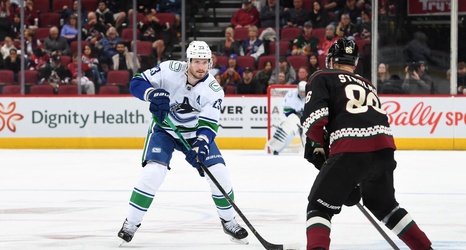 A week ago today, the Arizona Coyotes and Vancouver Canucks faced off at Gila River Arena. The Canucks won that game, beating the Coyotes 5-1. Tonight, they face each other again in Vancouver on the Coyotes’ final Canadian road trip of the season.

The injury bug has taken a big bite out of the Arizona Coyotes, but they got a few unexpected reinforcements on Tuesday. Fans knew to expect Nathan Smith after he signed his two-year ELC, but Jack McBain also made his debut, and J.J. Moser made his return. Moser hadn’t played since March 15th, and McBain has been dealing with an ankle injury.