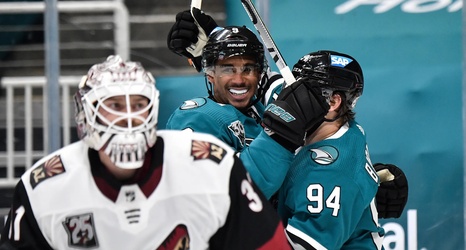 Last night was one of the important games for the Arizona Coyotes. They have fewer than ten games remaining in the regular season, and the Blues had just overtaken them for the final playoff spot earlier in the day.

And in what may be the worst possible start to an important game, a miscommunication between Darcy Kuemper and Jason Demers led to an early goal.

The San Jose Sharks’ Noah Gregor picking up the puck behind the goal line and shoot it at an out-of-position Kuemper. The puck went in, and the Sharks had a 1-0 lead 17 seconds into the game.