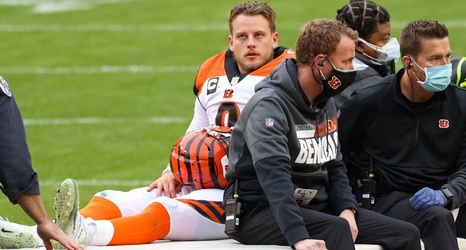 One of the most promising NFL seasons by a rookie quarterback came to an end on Sunday.

Cincinnati Bengals quarterback Joe Burrow effectively ruled himself out for the remainder of the 2020 season after he was carted off the field in Sunday's game against the Washington Football Team. Burrow suffered a left-leg injury in the third quarter. Burrow was sandwiched by two Washington defenders who converged on him on a third-and-2 pass attempt.

On Sunday afternoon, Burrow sent out a tweet thanking people for support and suggesting he was done in 2020.