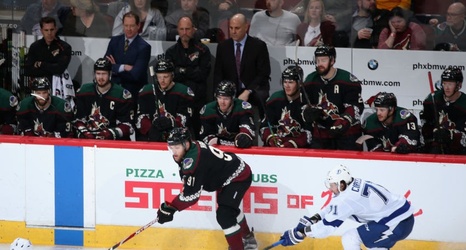 GLENDALE, ARIZONA - FEBRUARY 22: Taylor Hall #91 of the Arizona Coyotes skates with the puck ahead of Anthony Cirelli #71 of the Tampa Bay Lightning during the third period of the NHL game at Gila River Arena on February 22, 2020 in Glendale, Arizona. The Coyotes defeated the Lightning 7-3. (Photo by Christian Petersen/Getty Images)

Following a tough yet impressive 7 games against the St. Louis Blues, the Arizona Coyotes have imploded and lost a pair at home to the Los Angeles Kings at Gila River Arena.