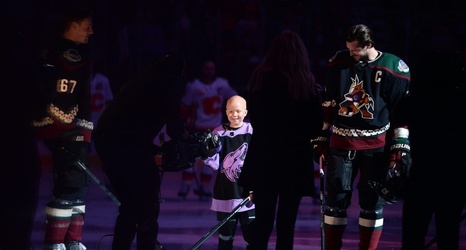 The Arizona Coyotes lost a beloved friend and inspiration Tuesday morning with the passing of nine-year-old Leighton Accardo, who lost her long battle with cancer.

Leighton's fight and positive spirit had a deep impact on the Coyotes, several of whom, along with head coach Rick Tocchet, general manager Bill Armstrong and broadcasters, visited the Accardo family in Gilbert Tuesday afternoon to offer their condolences and play some street hockey with the Accardo children.

"She inspired our whole organization and our team to really fight and play hard, and we're going to take that with us," said Coyotes captain Oliver Ekman-Larsson, who formed a bond with Leighton since meeting her about a year ago when the Coyotes honored her fight against germ cell cancer on Hockey Fights Cancer Night at Gila River Arena.