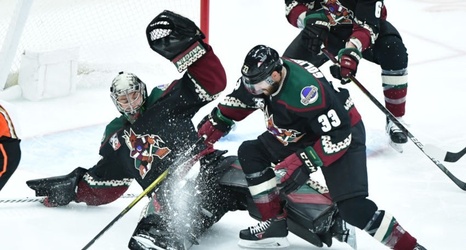 Okay, admit it. There were a handful of times during the Arizona Coyotes game on Saturday night that you thought for sure that the San Jose Sharks were going to put the puck past Adin Hill, especially in the first period. It’s okay to say so, because you were by no means alone.

The Sharks peppered the poor guy from all angles, yet the scoreboard stubbornly remained at zero on the Sharks’ side of the ledger despite a few power play chances generously provided to the Sharks by the boys in purple.