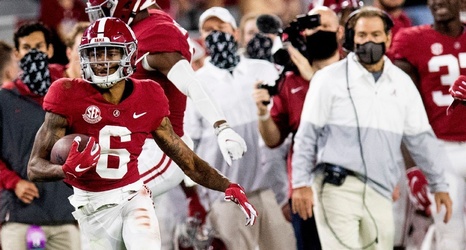 Alabama is ranked No. 1 in the initial College Football Playoff rankings, followed by Notre Dame, Clemson and Ohio State, while BYU debuts at No. 14 despite a 9-0 start to its season.

Nick Saban's Crimson Tide are among four SEC teams appearing in the top nine of the initial rankings, along with No. 5 Texas A&M, No. 6 Florida and No. 9 Georgia. (Auburn, at No. 24, gives the conference five teams in the overall rankings.) Georgia is the highest-rated two-loss team despite double-digit defeats to both Alabama and Florida, while Clemson, which lost its only game to Notre Dame in two overtimes while playing without starting quarterback Trevor Lawrence, is the highest-rated one-loss team.