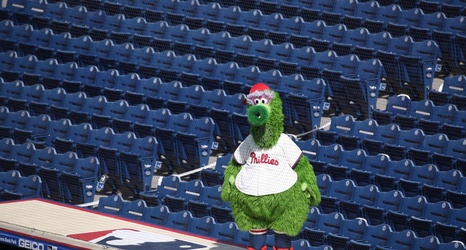 There’s quite a few New York Yankees fans at Citizens Bank Park Saturday, but the most notable fan in attendance made his allegiances pretty clear ahead of the top of the sixth inning.

As Frank Sinatra’s “New York” played over the speakers, the Phillie Phanatic, donning a tuxedo, smashed a Yankees helmet in front of the team’s dugout:

Having spent parts of eight seasons with the Miami Marlins, Giancarlo Stanton has seen quite a bit of the Phillie Phanatic. Still, the four-time All-Star seemed none-too-pleased with the antics of the most popular mascot in sports.