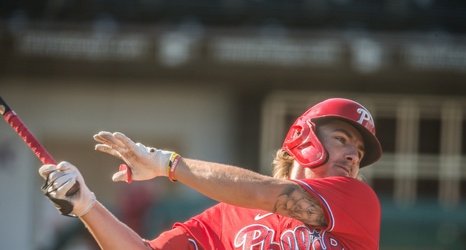 Philadelphia Phillies prospect Bryson Stott has been lighting up the Arizona Fall League, and he’s continued that success into the league’s midseason Fall Stars Game.

Starting at shortstop for the West team, Stott knocked in the first run of the game in the opening frame with an RBI double to right field.

The play can be seen below:

The 24-year-old, in the West lineup alongside fellow Phillies prospect Logan O’Hoppe, is batting .319/.454/.458 with 20 walks compared to 12 strikeouts through 20 games for the Peoria Javelinas.