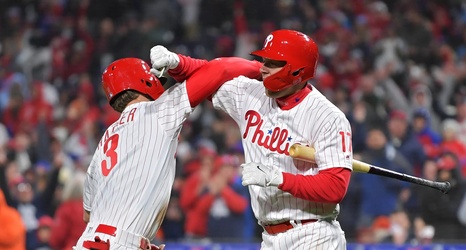 After three games, a few comparisons suggest themselves for the Phillies lineup. The Charlie Manuel Golden Era teams is perhaps the most obvious. Jim Fregosi’s 1993 wrecking crew, for those of us a bit further on in years. Or maybe you’re thinking of Professor Farnsworth’s mutant atomic supermen, just with more guys and in a different sport.

The point is, they’re good. Game Three saw fewer runs, and fewer homers, than the glorious excess of the first two victories, but particularly given the weather conditions—pretty much what you’d expect at a night game in March in the northeastern US—it was no less impressive.