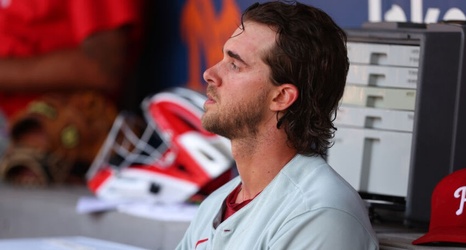 NEW YORK, NY - JUNE 25: Aaron Nola #27 of the Philadelphia Phillies in action against the New York Mets during game one of a doubleheader at Citi Field on June 25, 2021 in New York City. (Photo by Rich Schultz/Getty Images)

The Philadelphia Phillies officially lost right-hander Zach Eflin for the season when he was placed on the 60-day injured list last week.

Their starting rotation, anchored by Cy Young candidate Zack Wheeler, has been a question mark all season. Their lack of pitching depth has forced manager Joe Girardi into “bullpen games” every fifth game, a strategy expected to continue for the remainder of the 2021 season.