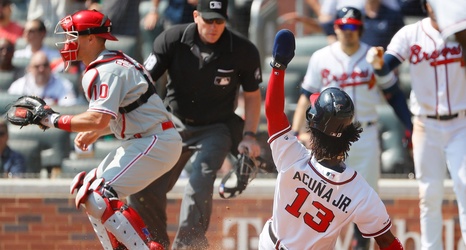 ATLANTA (AP) — Ronald Acuña Jr. became the second-youngest player in baseball history to hit 40 homers in a season, Freddie Freeman also drove in two runs and the Atlanta Braves clinched at least a tie for first place in the NL East with a 5-4 victory over the Philadelphia Phillies on Thursday.

With eight games left in the regular season, a second straight division title seems a formality for the Braves. They hold a 9 1/2-game lead over the Washington Nationals, who have played three fewer games and were off Thursday.

The Braves can officially celebrate as soon as Friday with either a victory over the San Francisco Giants or if Washington loses at Miami.