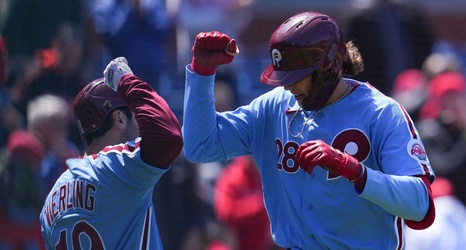 PHILADELPHIA (AP) — Zack Wheeler tossed one-hit ball over six shutout innings and Alec Bohm homered to help the Philadelphia Phillies complete a four-game sweep of the Colorado Rockies with a 7-1 victory on Thursday.

Wheeler, who lost his first three starts of the season, had an outing more in line with the ones that helped him finish second in NL Cy Young Award voting last season. Wheeler (1-3) struck out seven and walked four. He threw nine strikes on nine pitches without a strikeout in a 1-2-3 first inning and left Sam Hilliard stranded on third after a leadoff triple in the third inning.